The Backgammon world was set on its ear in 2019 when Robert Caldwell won, what can only be called, the Caldwell Slam! That's right, he won the Sunday and Wednesday leagues.
With no more mountains to climb around here he may just pack his bags and return to his native Chicago where the wind is wilder and the pond is bigger or he may just terrorize us a few more years. 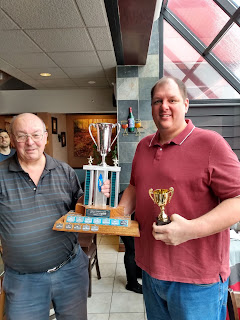 
There are 2 Backgammon Clubs in Ottawa, a weekly and a monthly.
The monthly takes place at Lorenzo Bar and Grill,  911 Richmond, the first Sunday of the month at 9:45 o'clock in the morning. The weekly, every Wednesday at 7 at Big Rig on Iris street.
For any questions email skaadee@gmail.com

Here are the dates for the Monthly club for 2020


The Weekly Ottawa Backgammon Club meets every Wednesday at Big Rig 0n Iris street at 6:45 pm. All levels are welcome.


Here are the results, year-to-date:


Results so far this year

There is a new backgammon league starting up in Ottawa. All levels welcome! See below. Ottawa Area Backgammon – Weekly Tournaments March 12, 2017 Dates: Every Wednesday evening starting March 22, 7:00 PM Venue: Big Rig on Iris. Match Length: 5 points Entry Fees: $20 entry fee with optional $20 side pool Prize Distribution: Entry Fees: 1 st – 50%, 2nd – 25%, Consolation Winner – 25% Side Pool: Farthest in Main Bracket – two thirds (2/3), Farthest in Consolation Bracket – one third (1/3) Club Points: 1 point for each win. (no points for a bye.) Additional (Bonus) Points for placing in the tournament – 4 points for winning the tournament, 2 points for coming in 2nd or winning the Consolation. Tournament Directors: Stuart Thomson – Cell: (613) 413-4234 Statistician: Scott Douglas Everyone is guaranteed 2 matches. Please note that the Holland rule will not be in use for these tournaments. The tournament draw will start at 7:00pm sharp. If you think you will be a little later than 7:00pm, please call my cell ahead of time so we can place you in the draw. Also, it will help the club’s reputation greatly if everyone can order some food or drinks. Ultimately the restaurant needs patrons that spend money and this includes us!
Posted by Scott at 2:26 PM No comments: 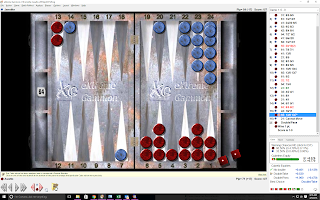 This position came up and someone wanted to know why it was such a big double for red. Here's 3 responses from 3 separate members of the Ottawa BG club. Feel free to leave your opinion. 1. "I see the effective pip count as close to even with all of blue's wastage and the gap on the 4. I don't think there is any roll for red that blue has an immediate re double? You also have to look at red's 5% gammon chances where blue has no gammon chance. When red does hit, his winning chances are over 90%. When red rolls a missing number like say 5-2, he can play 13-6 with not much worry and blue doubling after that would be a big blunder. I see this as a pretty big edge for red." 2. "First of all the idea of an immediate redouble is insignificant since the cube is centered and would have been available to blue anyway. The pip count is deceptive, red has a perfectly smooth bear off. It’s better to count crossovers in the outfield and the pip count in the outfield. The crossovers are 6 to 5, with red on the roll. The outfield pip count is 26 to 29. Also, when red fails to throw a 6, he can still move off the 13 point, say with a 54, if he wants since blue’s board is not set up to contain a man on the bar. It’s a double because any hit is a loss of market. This type of position occurs often, the important thing is to know that it is a take for blue." 3. "I set up the position on gnu, and it also considers it a definite double--I would guess because of the blot in blue's home board which must involve a real gammon risk in case red hits and gets hit in return. But even when I moved that blot to the 22 point, gnu still thought it is a double, but a very borderline one."
Posted by Scott at 1:18 PM 2 comments:

This, of course, is what all the fighting is about. The Lessard Cup! The best record over the course of a year takes her home. 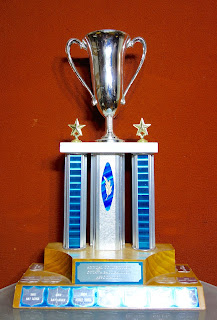 Here is the website for the Ottawa Backgammon Club: http://leaderdragon.tripod.com/bgammon.html Tournaments take place at 9:45 on the first Sunday of every month (except July and August)at Buster's Bar and Grill at Lincoln Heights Shopping Centre, 665 Richmond Road. All are welcome. You should be there at 9:30am if you want to play. Buy-in is low.
Posted by Scott at 9:36 AM No comments: